The Case Of The Night Mark – Chapter 2

When Samantha came to, she was no longer sat on the rusty bench in the bus stop. Instead, she was lying flat on a cold, marble floor in a strange, circular room. Torches were staggered along the walls, all alit and dancing with a strong, blue flame.

Confused and disoriented, Sam crawled up and patted herself, just to get a sense of what was going on. She was still wearing all her clothes, so she hadn’t been kidnapped by a pervert. That was something, she thought.

But then what was going on? Where was she and how did she get here?

“Hello?” she called, aware that if there was a murderer waiting to take her out, he or she wouldn’t reply. Still, she couldn’t stop herself. “Hello?”

The silence was deafening and the eerie blue fire just made everything creepy. If someone was pulling a prank, Sam wasn’t appreciating it. In fact, it was making her quite angry.

“Oi! Whoever you are, I’m not in the mood for jokes. You have no idea who you’re messing with!” she screamed, sounding braver than she felt. “Hello? Did you hear me?”

“I can hear you,” a sultry voice replied.

Samantha frowned. A woman was messing with her? What did they want?

“This better not be Melissa’s doing,” Sam growled as she brought her short hair back in a ponytail. Exhaustion raged through her body, even if she had no idea where that came from. Still, it wasn’t going to stop her. “Show yourself!”

The fire flickered out, darkening the entire room for the briefest of seconds. As soon as the blue flame relit the torches, a second figure was standing next to Sam.

The stranger chuckled throatily as she flicked her long hair over her shoulder. Her bright blue eyes were vibrant and sparkling with life, just like the fire around her. Clad in a long, black dress with a split down her hip, she was the epitome of beauty.

Sam gulped. She’d seen some beautiful women in her day and while she never considered herself ugly, next to the mysterious appearance, she felt like a flan pudding. Wrinkled skin and wobbly when shaken.

The woman waved her finger. “Apologies, Lilith Fatuus. Pleased to make your acquaintance.”

“Hell,” she said, in such a matter-of-fact way, as if that meant something. “I’m messing with you. Welcome to The Drunken Turnip.”

“That means nothing to me,” Sam replied, finding it hard not to glare at the other woman. She seemed incredibly oblivious to her distress, in fact, she seemed rather amused by it.

“Really?” Sam remarked sarcastically. “Then who do you serve, horses?”

“Let me tell you a secret, sweetheart. All bars are nocturnal. Most people aren’t getting plastered during the day, are they?”

Sam realised it was hostage 101 not to upset her captor, but she couldn’t hold her tongue. She had enough of this. The other woman might be beautiful, but she didn’t look that strong or threatening. To top it off, her dress or heels certainly didn’t look practical for fighting either.

That was why Sam wore practical, sturdy shoes. If she had to run, she’d go a whole lot faster than Madam Fancy in her stilettos.

With a bemused sneer, Lilith rolled her eyes. “You’ve got no idea what you just got yourself into, do you?”

That sounded like a challenge, Sam thought. She looked around, trying to get as much information from her surroundings as possible. The floor was made from solid, expensive marble, so the owner hadn’t skimped. In fact, it was an odd choice for a hostage room or prison.

That probably meant this space wasn’t meant to keep people in, which was a good thing. It would be easier to escape from.

Encouraged by that realisation, Sam willed herself to calm down and assess the rest of her surroundings with the same analytical mind she used at her job.

The lights had gone out just before Lilith had entered. There were only two possible reasons for that. Dramatics or to hide where the entrance was. Judging from the circular room and the smooth walls, it had to be either a hidden door or an automatic system, which was a bit more of a problem.

There weren’t many options for Samantha, which she realised soon enough after a quick look around. Before she did something crazy, she really ought to find out what this Lilith wanted from her.

With her hands on her hips, something that her wife absolutely hated, Sam gave the other woman her most challenging look. “What is it you want from me then?”

“Marked? What are you talking about?”

Sam turned her wrist up, trying to figure out what the other woman was talking about. “I can’t see anything?”

“You can’t?” Lilith rolled her eyes. “Oh right, your poor human eyes. Here, let me turn the light off.”

With a single clap, the fires flickered out and an overwhelming, suffocating darkness fell over the two of them. Just as Sam was about to question what was going on, her attention was drawn to her wrist.

A moment ago, there hadn’t been anything to see, but now in the dark, it was a different story. A bright, neon blue hue radiated from an intricate and strange marking that pulsated under her skin.

“What the fuck is that?” Sam shrieked. Her first instinct was to rub it like an ink stain, but that quickly proved to do nothing. The blue light didn’t relent for one bit and in fact, it was making her feel a little dizzy.

Lilith gestured to the blue light. “You were marked.”

“A hellhound,” Lilith said, shooting her dazzling smile. “Just a little one.”

Sam glared at the other woman. “Is that a joke?”

She chuckled. “No, I’m serious. This one is a puppy, runt of the litter, but still very effective magic.”

“You know, I’m really not in the mood for all this.” Sam gestured to the general area around her. “If you could just tell me what you want?”

She was quickly getting frustrated with all the shenanigans and if this woman was trying to get ransom money from her or anything, she chose the wrong day to do that. Any other day, she would’ve panicked and been reduced to a whimpering mess. Not today.

Today, she was pissed off. At herself, at the world, and at this lady.

Lilith shook her head, her hair dancing on her slender back. “You’re a very rational person, aren’t you?”

“I am,” Sam said, the pride beaming in her voice.

“And you don’t believe in magic.”

Lilith stepped closer to Sam, so close the latter could smell the delicate perfume on her skin. Lilith gave her a challenging look. “Not even when it stares you in the face?”

“What are you saying?”

“I’m saying, you better believe it.” Her bright blue eyes flickered with fire before they spilt down her skin and lit up intricate markings. They rippled down her neck, across her collarbone where they disappeared under the fabric of her dress.

She held out her hand, giving a little wave. A small ball of light appeared in her palm, dancing and floating as it hovered in the air. Lilith tweaked an eyebrow as she extinguished the flickering light with a simple move. “We’re real.” 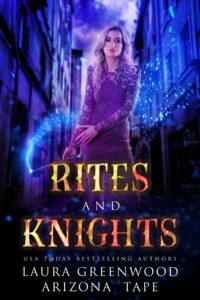